Growing in our relationships
with God and people!

The Hebrew engagement and wedding was very unlike our weddings today. Once the man got engaged, he would go off and start arranging a place for them to live. She would not see him until he came to get her to bring her to their new home. This would be the wedding day. She never knew when he would come. She and others were held in suspense. She always had to be ready for him. When he came with all his friends, they would feast and he would take her to their new home. Read Jesus’ parable  (Matthew 25:1-13).

The kingdom of heaven will be comparable to ten virgins, who took their lamps, and went out to meet the bridegroom. And five of them were foolish, and five were prudent. For when the foolish took their lamps, they took no oil with them, but the prudent took oil in flasks along with their lamps. Now while the bridegroom was delaying, they all got drowsy and began to sleep. But at midnight there was a shout, ‘Behold, the bridegroom! Come out to meet him.’ Then all those virgins rose, and trimmed their lamps. And the foolish said to the prudent, ‘Give us some of your oil, for our lamps are going out.’ But the prudent answered, saying, ‘No, there will not be enough for us and you too; go instead to the dealers and buy some for yourselves.’

And while they were going away to make the purchase, the bridegroom came, and those who were ready went in with him to the wedding feast; and the door was shut. And later the other virgins also came, saying, ‘Lord, lord, open up for us.’ But he answered and said, ‘Truly I say to you, I do not know you.’ Be on the alert then, for you do not know the day nor the hour.

The point of the above parable is clear. The bridegroom stands for Christ and His final return to take His church, the bride, home with Him. The virgins represent the professing people of God. Some of them were ready for the Bridegroom; others were not. The consequences were serious. Even though the virgins might have been ready and eager at the beginning of the wait for the bridegroom, they needed to be ready for him when he returned.

We do not know when Christ will return. When He does, that will be the end of things as we know them. Because we do not know when He is coming, then it is easy to be distracted with other less important affairs of this life. But as in the Hebrew wedding, the bride had to be busy, be ready every day for his coming for she simply did not know when her man was coming for her.

Application: List two things that you would not be doing (but are) if Christ came today and two things you would do (but are not).

I would not be doing:

I would be doing: 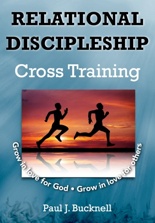 A strategic basic discipleship series designed to help Christians grow not only in their relationship with God but also with other people.

Each section uses a familiar relationship to bring out basic but very practical Biblical teaching.

We highly recommend getting the BFF Discipleship #1 Digital Library which not only includes the Relationship Discipleship book, but slides, summaries, user guide, teacher's reference, etc. This D#1 Library also contains all our other Christian training resources for new believers.

These Christian media-enriched resources can also be purchased in the BFF Resource Center.