Restoration of all Things

"Only a little sin won't matter."

Compromise was very costly in this person's life!

“Why are you in despair, O my soul? And why have you become disturbed within me? Hope in God, for I shall again praise Him for the help of His presence” (Psalm 42:5).

David had many things going against him. For one, David was anointed king but was perpetually being accused of deviously taking over Saul’s kingdom and use his best friend, Jonathan, the son of King Saul, for political purposes. Saul’s treacherous treatment of David proved the time to leave had come.

He had to flee the country. David had to permanently run away, leaving what and who he loved. Leaving all for a very unpredictable world was not easy. To where? This he did not know.

The situation turned worst, though. Perhaps nothing was so perplexing for David than to hear the tragic news from Abiathar, the lone escapee from the city of priests, that due to David, King Saul decimated the City of Nob.

Saul accused them of siding with David merely because he had recently obtained water, food and his sword (the one he won from Goliath). Saul, God’s king of Israel, had become raging mad, a jealous tyrant willing to kill God’s own priests, even by a foreigner.

Being urgent, David ran into a trap of sorts. The King of Gath heard this runaway David was a threat to his kingdom so David actually feigned a madman when brought before the Philistine King (1 Sam 22). Had David himself gone mad along with King Saul? Though promised to be king by God’s prophet, David ended up as a refugee leading a band of bandits and other discontents.

Deep-rooted questions could easily rise in David’s mind. Is it possible that David’s lie brought the early end of all those priests and their families? How could he handle this group now following him? Why has God allowed all this to happen? Each question could easily lead him into the realm of depression.
Depression occurs when we allow the unreasonable, confusing, and mad events around us steal the last bit of hope from our hearts.

David’s world seemed to have gone wild like a rabid dog, intent on passing its deathly confusion on to others. At times it seems that God has unlatched Himself from life, and let the world go out of kilt, allowing us to drift off by ourselves, much like a space astronaut cut free from his connecting life cable.

Tragedies occur in our lives that warp our notions of normal life, attempting to thwart any simple trust in God. But it is this trust in God that becomes our only link to sanity. Perhaps David's madman experience came about when he took his eyes off the Lord during this most desperate time.

But despite David’s feeble attempt to grasp some understanding of all this, along with his madman prop, note how the Lord cared for him through this period of disillusionment. In the Psalms we read of the advice David gave to himself, as if trying to wake himself from his stupor of unbelief, “Why are you in despair, O my soul? And why have you become disturbed within me? Hope in God, for I shall again praise Him for the help of His presence” (Psalm 42:5).

Our true link to sanity is not to understand the incomprehensible but to trust in the God who oversees our very lives even in this very unpredictable sin-stained world. 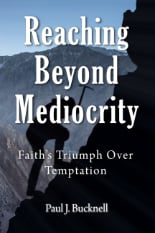 Other articles on depression:

The Downward Cycle of Depression Linked to the Root Problem